People with Vitiligo can suffer from depression, anxiety, social embarrassment. They can also feel very self-conscious due to their physical appearance.

Skin colour is determined by a special pigment called Melanin. Vitiligo appears when skin pigment cells (Melanocytes) are unable to function or when they die. 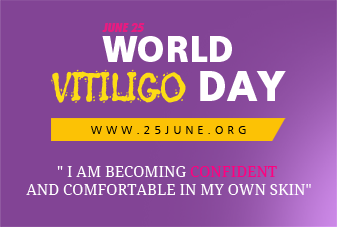 The precise cause behind Vitiligo is currently unknown but research does suggest that it may arise from an autoimmune condition where a person’s’ body destroys its own melanocytes that results in noticeable white patches on the skin. In addition stress, family history of vitiligo, overexposure to sun or viral causes.

Vitiligo is also classified into two main categories, Localized and Generalized. Localized vitiligo tends to affect areas of the skin that are associated with dorsal roots from the spinal cord. This typically manifests as one or more areas of pigment loss on only one side of the body. It occurs most commonly in children, teenagers.

A survey conducted by WHO states that half of the people who have Vitiligo develops within their age of 20 years and the rest of them before 40 years.

Although Focal pattern Vitiligo and Segmental Vitiligo remain localized and do not spread to the neighboring area, General Vitiligo has no guarantee as it totally depends on the human tissues and skin nature.

For some people Vitiligo doesn’t spread, for some, it spreads so slowly over a year’s time and for some others it just spreads like a fire.

Vitiligo is in no way a life-threatening condition, however, it can have a big impact on of the sufferer’s psychological and psychosocial well being. Though there is currently no cure for Vitiligo, there are treatments available. As a rule of thumb, the earlier you begin treatment, the better the results would be.

Various surgical methods are followed at our clinic to treat Vitiligo and other similar skin diseases.

The most advanced among these is melanocyte transplantation which gives excellent cosmetic results with minimum or no side effects. It is a safe and simple Outpatient procedure and multiple areas can be treated simultaneously.

Melanocyte transplantation involves grafting the skin cells on the affected area (white patches). The cosmetic result with this treatment is better than other surgical options like skin grafting. In this method, a thin layer of skin is taken from the normal skin (usually thighs) and the skin cells are separated and grafted onto the affected area.

The advantages of this technique are – only a small area of skin is needed to cover large areas of white patches, no scarring, good cosmesis, can be done as an outpatient procedure & does not require general anesthesia.

If you suffer from Vitiligo or if you know someone else that does, we highly recommend beginning the treatment.